Photographer Michel Tcherevkoff, recognized for his relentless innovation and signature style for clients including Estee Lauder, Valentino and Canon, is expanding his growing brand to feature designer shoes! Sven Segal, founder of Po-Zu, proposed a collaboration. 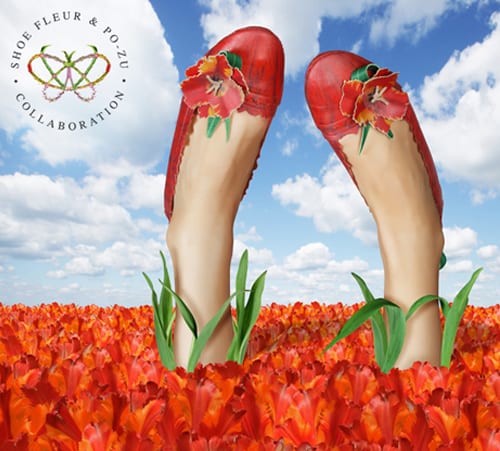 Michel: ‘My fantasy designs would be made into real shoes that reflected Po-Zu’s dedication to sustainable and toxic-free manufacturing standards.’ Based on the concept behind Shoe Fleur: A Footwear Fantasy, Michel re-interpreted five designs into real shoes.

The collection was created without any sacrifice of comfort or corporate conscience. The construction is called ‘Stitch and Turn,’ by which the upper is stitched to the sole and turned inside out. The ability of turning the shoe inside out makes the shoe incredibly soft, flexible and ultimately very comfortable. The uppers are mostly made from printed vegetable tanned leathers, with the exception of Footloose, which is cotton based. The soles are made from natural latex, while Po-Zu’s renowned coconut foot-mattress has been slim-lined and made removable to fit with the elegance of the shoes.

Michel’s designs for TheShoe Fleur Collection Spring 2013 are for the woman who appreciates fine art as much as she values comfort. ‘I’m thinking about the woman who indulges her wildest footwear fantasies without sacrificing her sole,’ Michel says with a smile in his voice.

The Collaboration:
Michel Tcherevkoff is a commercial photographer, artist and sculptor. Shoe Fleur began as a personal project when Michel noticed a resemblance between a leaf he had photographed and a woman’s stiletto shoe. A talented innovator, he crafted individual flowers into small sculptures that he photographed and printed in his New York studio. The book, Shoe Fleur: A Footwear Fantasy continues to receive international awards for creativity. Michel’s exhibition of fantasy footwear prints debuted at The Museum of Arts and Design in New York during Fashion Week, before traveling to galleries and museums worldwide.

Po-Zu was launched in 2006 by shoe designer Sven Segal with the aim of setting new standards in ecological and ethical footwear manufacturing. The shoes are made from carefully selected natural materials, that are healthy for feet, safe for all workers throughout the manufacturing supply chain, and kind to the environment. The experience of walking or even standing in Po-Zu shoes is an absolute pleasure, thanks to their unique coconut fibre ‘foot-mattress’ your feet will feel incredibly rested.